You Gotta Have Hope 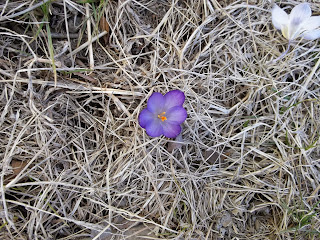 "Therefore being justified by faith, we have peace with God through our Lord Jesus Christ, through whom also we have obtained our introduction by faith into this grace in which we stand; and we exult in hope of the glory of God. And not only this, but we also exult in our tribulations, knowing that tribulation brings about perseverance; and perseverance, proven character, and proven character, hope; and hope does not disappoint, because the love of God has been poured out within our hearts through the Holy Spirit who was given to us." Romans 5: 1-5

A couple of years ago during the holidays, one of my dear friends gave me a little ornament that said "hope" on it. Last Christmas I hung it in the living room and haven't had the heart to remove it. When she gave it to me, she said, "Everyone's got to have a little hope, you know?"

I concur. I have been reduced to finding hope in just one place: the promises of God's Word. The other day I was reading and came across a verse that mentioned hope. In the book Nelson's Cross Reference Guide to the Bible by Jerome Smith, led me to Romans 15: 4 which cross referenced dozens of more verses on hope. I started writing these verses in my journal. Some of them just seemed to jump off the page, even though I am sure I have read them many times before.


"Now may the God hope fill you all with joy and peace in believing, that you may abound in hope by the power of the Holy Spirit." Rom. 15: 13

The hope isn't in circumstances but in believing God's Word. Whenever I argue with God's Word, I am the one who suffers for it. But what tranquility comes when I just believe the promises.

Romans 8: 24 "For in hope we are saved, but hope that is seen is not hope; for why does one hope for what he sees?"


Psalm 71:14 "But I will hope continually, And will yet praise Thee more and more."

Psalm 119:74 "They that fear Thee will be glad when they see me; because I have hoped in Thy Word."

Galatians 5:5 "For we through the Spirit eagerly wait for the hope of righteousness by faith."

Eph. 1:18 "...the eyes of your understanding being enlightened, that you may know what is the hope of your calling, what are the riches of the glory of His inheritance in the saints..."

Col. 1:27 "To them God willed to make known what are the riches of the glory of the mystery among the Gentiles: which is Christ in you, the hope of glory."

These are some of the verses I wrote in my journal and I have not finished writing them all yet! If we look around us, it doesn't look too hopeful, but when we look in God's Word and know that God is true to His Word, we can have strength to get out of bed in the morning, to plug on in God's plan for one more day.

One day soon, our Hope will appear in the sky, so let us all continue to hold on to the Promises of God's Word!
Posted by inChristalone~Megan Vance at 2:47 PM No comments:


"Now David was greatly distressed, for the people spoke of stoning him, because the soul of all the people was grieved, every man for his sons and his daughters. But David strengthened himself in the LORD his God." I Samuel 30:6

I read these words of encouragement this morning and how they ministered to my soul. David and his men had been with the Philistines, because David was running from Saul the King of Israel, who wanted to kill David. Seeking refuge there, all went well until the Philistines were going to attack Israel.

At that point, the princes of the Philistines decided to get rid of David and his men. So David and his men went back to their camp at Ziklag, only to find that it was burned with fire and all the wives and children had been carried away captive. That is why his men spoke of stoning David.

Could you imagine being in David's shoes. Your whole camp of men are against you, so David goes to the only place he knows that he will find help: to God.

I looked up the word for strengthened in the Hebrew. I wanted to know what it meant to strengthen my heart like David did. Here is the meaning of strengthen: I.to strengthen, prevail, harden, be strong, become strong, be courageous, be firm, grow firm, be resolute, be sore
It comes from the Hebrew word #2388 chazaq.

David and his men ended up recovering all that was lost because God was with David. David passed the test beforehand when everyone was ready to kill him by putting his trust solely in God.

What does it mean to strengthen my own heart in God? Well, today it means for me to believe what He says about me instead of what I believe about myself. When I look at myself, I feel hopeless. But He does not see me that way, praise Him!

I keep thinking He sees me the way I see myself. But God is not like us! He does not know us after our sins, but after the finished work of Christ. This was one of the things David understood, even before the Messiah came. For David understood that God did not see him the way he saw himself. After his great sin of premeditated murder and adultery, David knew that his sins were atoned for and that God did not see him in his sins, for he wrote in Psalm 32:1-2:

Blessed is he whose transgression is forgiven,
Whose sin is covered.

Blessed is the man to whom the LORD does not impute iniquity,
And in whose spirit there is no deceit.

The word for covered is kacah (H3680) and it means: I.to cover, conceal, hide

Wasn't God's very first act after man fell in the Garden of Eden to cover them with the clothes of skin?

What encouragement we get from the "weeping prophet" Jeremiah 3: 21-24:

This I recall to my mind,
Therefore I have hope.
Through the LORD’s mercies we are not consumed,
Because His compassions fail not.
They are new every morning;
Great is Your faithfulness.
“The LORD is my portion,” says my soul,
“Therefore I hope in Him!”

I don't know about you, but I surely need new mercies every morning. To know that I am forgiven by God, so I can forgive myself and then forgive others. Oh, how I need His mercies.


Posted by inChristalone~Megan Vance at 9:22 AM 2 comments:

Joy in Working with My Hands 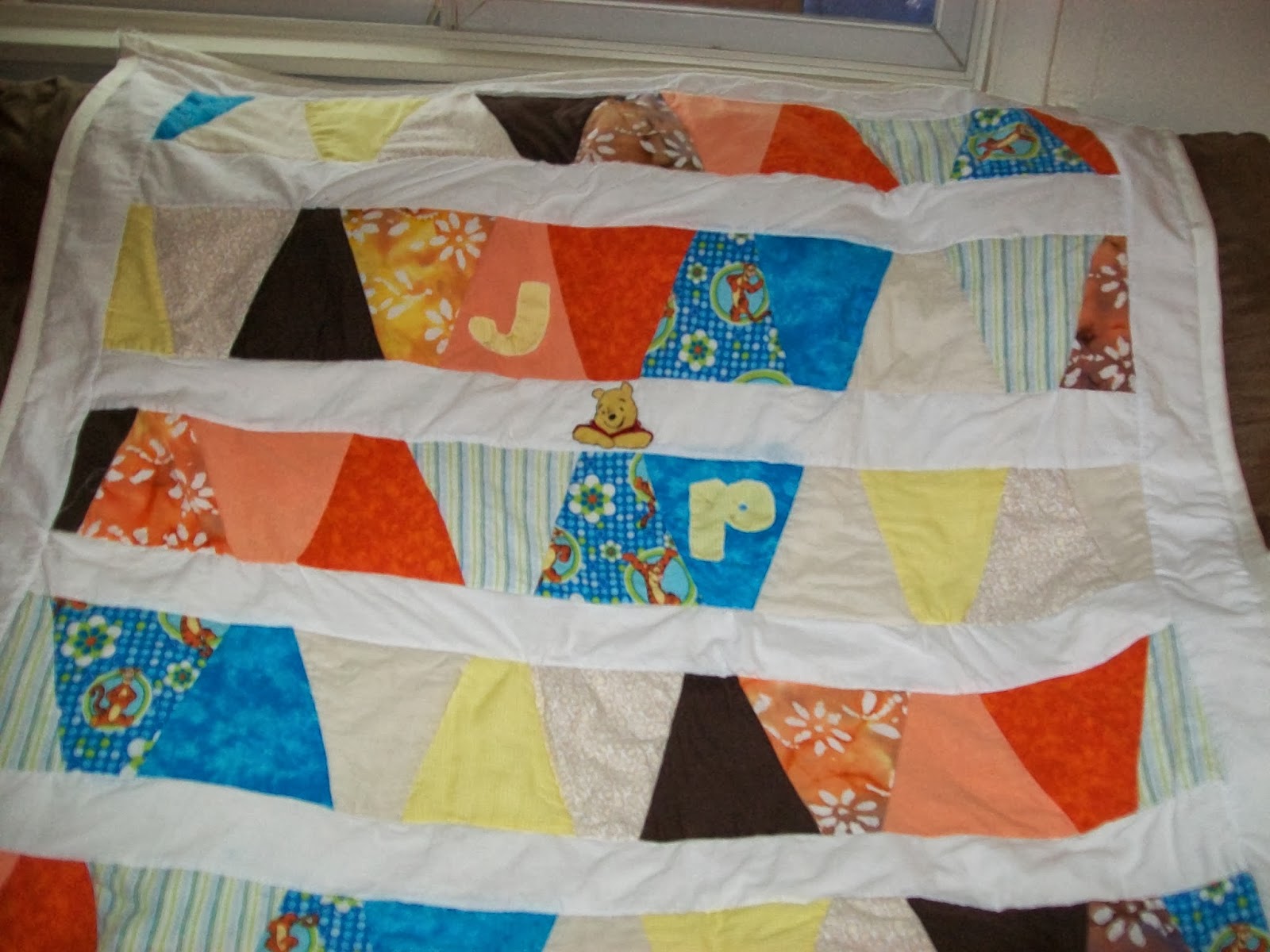 "Whatever you do, do it heartily, as to the Lord and not to men, knowing that from the Lord you will receive the reward of the inheritance; for your serve the Lord Christ." Colossians 3:23-24

I admit I am no Martha Stewart, or expert seamstress by any means, but have rekindled my passion for sewing, something I loved when my kids were little. I sewed them clothes, curtains, bedcovers and pillow cases, but then as life got too busy and I worked outside the home, the machines were put away for a long time. Not long ago, I finally made a quilt for my first grandbaby. My desire to create for my grandsons is strong. It makes me feel good to work again with my hands. I also like to write, do calligraphy, and if I had the time, I would start painting again.

The other day I was reading in Exodus about how the Israelites gathered together to design the tabernacle according to the pattern God had shown them. God included the women in these preparations, and in Exodus 35: 25-26 it says:

"All the women who were gifted artisans spun yarn with their hands, and brought what they had spun, of blue, purple, and scarlet, and fine linen. And all the women whose hearts stirred with wisdom spun yarn of goats’ hair."
I bet those women were delighted to do their very best work to produce the finest quality yarns. God had no prejudice in the women contributing to the beauty of the tabernacle, which was to represent to the Jews a picture of Christ.

Though I do not claim to be the Proverbs 31 woman, I hope to be more and more like her, with God's enablement. I like how she is said to work with her hands as well in Proverbs 31: 13:

"She seeks wool and flax, And willingly works with her hands."

I think of women just a few generations ago, how different it was for them! We have the opportunity now to be couch potatoes if we want to, or remain glued to the computer or smartphones because of the increase of technology. My mother in law never had a dishwasher to add to her convenience in cleaning up the family meals. My grandmothers had wringer washers where they needed to feed each item of clothing into the wringer for cleaning. Who would have time now for that? If I went back to my great grandmother's time it is likely they never had any car to take them on trips, but rode carriages drawn by horses to get to town.

Yes, the advancement of technology can be good, but it also can feel good to make things from scratch: bread, soups, and cakes, for example. Hanging the laundry outside to dry naturally gives the clothes such a nice smell. It was something everyone used to do. And at the end of the day, it feels good to know you worked hard, and have something to show for it. One of my daughter in laws creates beautiful crafty gifts for the family, and the other one makes wonderful homemade soaps. I am glad they get to create, too!

Think back to when we were little, before our teachers told us the "right" way to create a piece of artwork. Didn't it bring us joy just to create it? In some small way, we get to share in the joy of creating just like God did when He created us. I feel that same sense of joy today when I sit down and hear my sewing machine buzzing away, or the clack of my fingers typing a poem, or creating a meal that my husband will rave over.

God is so great to give us each talents and let us discover ways of blessing others (and ourselves) through using them.

"... because the LORD your God will bless you in all your produce and in all the work of your hands, so that you surely rejoice."

What brings your heart and your hands delight? I would love to hear about it!

Posted by inChristalone~Megan Vance at 5:19 PM No comments: