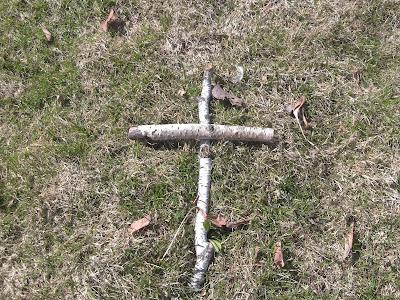 For the word of the cross is folly to those who are perishing, but to us who are being saved it is the power of God... For Jews demand signs and Greeks seek wisdom, but we preach Christ crucified... I Cor.1:18-22a

We all are given the gift of twenty four hours each day. How we spend them is up to us. In this busy world of multi-tasking  it "seems" foolish to spend a chunk of time each morning reading the Bible and in prayer. But in this time, I find daily rest for a soul that is so weary of this world.

My sister is weary of this world too. Just yesterday I encouraged her to come away from it all and to take the time just to be with Him, just to hear His voice and find refreshment for her struggling soul.

The Word is the only protection we have against the lies ready to bombard us from the media and in the world in general. It is also our protection against our own efforts to be "good" in and of ourselves.

And why can't we be good? The Bible tells us flat out that there is none good in Romans 3:12.

As I have been faithfully taught, we can't "do" right if we don't "think" right first. But how can we think right if we are fallen beings, prone to the constant lure of sin and doubt?

The answer is taking His cross.

The blessing of this is that I apply this cross to my own right to form my own opinions and judgments of others, or even to how I think God thinks of me. I may think I "know" how a person is (as if I'm omniscient) or how a certain situation may unfold. But the Word tells me, not to be saved, but if I want to be a disciple, that I must lose my own life and take up my cross daily to follow Him.

That sounds hard, right? Taking up a cross daily? But really it is grace, because it saves us from ourselves.

If we look at Matthew 11: 28-30 we see that cross is really our salvation from the tyranny of our old person who wants to stay on the throne and have his own way.

Come to Me, all who labor and are heavy laden, and I will give you rest. Take My yoke upon you, and learn from Me, for I am gentle and lowly in heart, and you will find rest for your souls. For my yoke is easy, and my burden is light. Matthew 11: 28-30


Many years ago, I  questioned if that statement was really truthful.  Deep down, I believed the Lord was a hard taskmaster, demanding things just too hard for me, walking around in constant condemnation. I figured in my heart that this could not be true, but until I understood that it is grace from start to finish did I grow to love this passage.

"Come,"# 1204, deuro,...calling or encourageing and may be translated, "come," "come hither" as an exclamation or an imperative (command)

EW Bullinger in the Companion Bible says of "come" : "Here Christ refers, not to sins, but to service, not to guilt, but to labour; not to the conscience, but to the heart; not to repentance, but to learning; not to finding forgiveness, but to finding rest."

of the word all, Bullinger continues that this word is limited to those seeking "rest"

Heavy laden: is the Greek word #5412 phortizo*, "to load up"...to overburden with ceremony (or spiritual anxiety): be heavy laden, load.

rest is the word anapauo, #373 "to repose... to refresh--... relax (give, take) rest. When used as a noun, it means "rest, quiet, from occupation, oppression, or torment."*
Bullinger says of rest: "Ours must be found in His gift. We have none to give."

Take is the Greek word airo "To take up and place on oneself, to take up and bear, meaning to bear, carry His yoke.

Learn is #3129, manthano: "ask, learn, study, be taught...particularly: intellectually, from others or from study or observation."
A disciple is a disciplined learner.

The Creator of this universe is meek, mild and gentle toward us, and pities us in all our troubles.

Humble is #5011, tapeinos- primarily signifies low-lying. This same thought of Christ's humility is expounded in Philippians 2.

In verse 30 is where is where this passage really encourages me, for:

His yoke is #2218 zugos: serving to couple two things together is used 1) metaphorically, of submission to authority... not simply imparted by Him but shared with Him.

This yoke is easy. This word is #5543, chrestos: easy, good, kind.
In speaking of Christ's yoke, "as having nothing harsh or galling about it."

This Savior that I speak of longs for this intimate fellowship with every one of His dear children. When I find myself out of fellowship with Him, I simply can ask myself how I went off His path of an easy yoke and a light burden? I confess it, knowing it's already paid for, and again take up His gracious, life-saving cross.

"Open my eyes, that I may behold wondrous things out of your law." Psalm 119:18--  consider in light of this wonderful passage.

I pray that God might bless anyone who reads this who may be worn down and burnt out, to find His yoke easy and burden light today. Amen.

As his divine power has given to us all things which relate to life and godliness, through the knowledge of him that has called us by glory and virtue,through which he has given to us the greatest and precious promises, that through these ye may become partakers of [the] divine nature, having escaped the corruption that is in the world through lust.  II Peter 1: 3-4 (Darby)

"Monday, Monday,"goes the song by the Mamas and the Papas. How often I have dreaded the day called Monday. For it ended the recreation of the weekend, and time to go back to school-- (grroan! way back when!) or back to work. As if God would not be faithful in the challenges of the new week. To be honest, don't a lot of people hate Mondays?

I thought about it: One seventh, or approximately 8 years of my life so far has been composed of Mondays. How many have I wasted in dread?

Today I put on my bed the quilt I've made over the last six months or so. It is my first bigger one and there are many mistakes, if you look on the back. I mainly used scraps of fabrics I had on hand.  Like on the quilt, I got to thinking about the many tints and colors of God's grace, bestowed upon me in this life. As the lovely pastel colors, the promises of God are variegated and beautiful, covering all the needs I have. In I Peter 4:10, we learn about this many tinted grace:

As every man hath received the gift, [even so] minister the same one to another, as good stewards of the manifold grace of God.

The word for manifold is poikilos. It is #4164 in Strong's and is defined this way:

Getting back to Mondays ,this morning I realized instead of just asking God for things I wanted, I could instead give him thanks for things, and turn all my requests into thanksgiving. In this way, I could demonstrate that I knew ahead of time He would take care of all the things I was concerned about. So instead of making my usual requests, I would say, for example, "Thank you for how you are working in so and so's life, in spite of the fact that I don't see by sight any answers." More and more things to be thankful for came to mind.

I decided on Mondays it would be a good day to give him thanks for all His blessings in all of my life. Just thank Him for physical blessings, for who He is, for all the  things I take for granted everyday. Just about every request I had could somehow be turned into a way of praising and thanking Him instead.

I need to tell you this was not my original thought, thanking instead of always asking. Long ago this was suggested to me by a dear friend who not only gave this advice, but lives it and demonstrates it before others. As a result, she radiates peace and tranquility even in the midst of storms.

Eureka! Mondays are a day to give Him thanks. Instead of groaning facing a new week, I can instead praise Him. When I look at it in this wonderful new way, I realized that Mondays are indeed magnificent.
Posted by inChristalone~Megan Vance at 2:24 PM 2 comments: