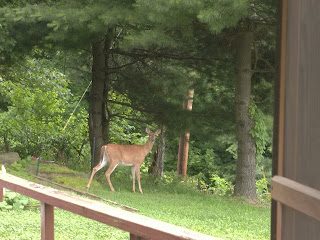 It's the good ole summertime, and sometimes I get sleepy and sluggish toward my relationship with God. The heat and humidity help me wilt into a sweaty mess, and soon my soul gets sloppy toward the urgent priorities of this life.

You see, I only have one life, and it's passing away quickly. That I realize more each day, as I look at the newborn life of my beautiful grandson, or the fragility of my precious elderly mother.

I easily am caught up with a million distractions. Has there ever been a time in human history when there could be more of them? Think of all the books, the channels on television, the movie theater, social media, breaking news headlines, and the lure of beautiful weather and vacationing. How is it that reading that "same old" Book every day could bring me refreshment when there are so many other things to choose from?

Sometimes a little voice whispers that my Bible routine is legalistic.  Well, anything under the "law" is not for us in the Church Age. As so wonderfully stated in today's reading from a beloved devotional:


"All harmony of truth is shattered when there is slightest commingling of the principles of law and grace. Grace alone now reigns through Christ to the glory of God the Father, the Son, and the Holy Spirit."      None but the Hungry Heart, Miles J.Stanford  June 24


But I need the Word, you see, as my daily bread, and don't read it "under law" to please God, but as a means to get to know Him.That's how t I respond to the lie that I am being legalistic. I go to the Word to find fresh manna for my soul each day, and to find out just how finished the work of Christ was on my behalf.

On hot sluggish summer days, there is cool refreshment to be found in the streams of His living water. Oh, the devil might try to distract  by saying we are legalistic or will be bored with the Word, but as always, he lies. How can an infinite God ever be boring? God's Word is always new, always fresh when we see it through the eyes of the Finished Work of Christ. The Old Testament spoke of Christ coming, and the tabernacle which the Israelities made foreshadowed Christ. The temple they worshipped in then is represented now in every believer's own body.

"Do you not know that you are the temple of God, and that the Spirit of God dwells in you?   I Corinthians 3: 16

No matter how much we think we "know," we know nothing yet as it ought to be known. (I Cor. 8:2) One day soon, in glory, we will see this Person of whom we read about on our days on earth, and will realize that pursuing Him was the one and only thing that mattered in this life.

Posted by inChristalone~Megan Vance at 7:35 AM No comments:

Labels: cool refreshment of the Word, no law commingles with grace, None but the Hungry Heart, Psalm 42: 1-2, sluggishness of soul, summer slumber, we are the temple of God 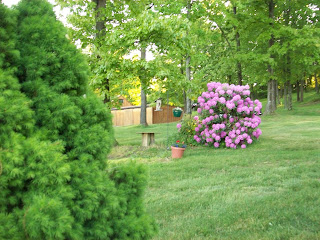 Abraham and Lot were at odds. It was time for them to separate. Abraham gave Lot the choice of where to go, even though it seemed that Lot was getting the better deal by choosing the well watered plain of Jordan.

But shortly, that lovely land would be destroyed because of the great wickedness of the people there. In fact, Lot's wife would not make it out of there alive when the judgment commenced. Still, Lot had chosen that what he thought was the best for himself.

I have thought and thought over the years about those five little words: "Then Lot chose for himself."

It seemed, by sight, that he was getting the better deal. But that was by sight. We know that the Father of our faith, Abraham became the friend of God because of his faith. In faith, Abraham let God choose the land where he would dwell, and had the freedom to let his cousin Lot make his own choice.

There was a decision that had to be made. Abraham trusted God enough to go ahead and let Lot choose. How often, in my own life my family and I were at a crossroad. A decision had to be made. Like Lot, I often looked around me and chose with my eyes what I thought would be best for my family. If my husband had a different opinion, the adage, "If Mama ain't happy ain't nobody happy" rang true. By my pouting and arguing, he would relent and I would choose the well watered plain that would eventually mean destruction.

One day God in His mercy showed me Proverbs 14:1. When I read it, I felt like a bomb might have been going off in my spirit, for it cut me to the quick.

The wise woman builds her house. But the foolish pulls it down with her hands.


Ouch! I didn't like that. I thought, "God, why did You have to let that verse be allowed in Your Word?"

But it was for my safety. As a woman, I do not think like a man. Aha! I think with my emotions and let my emotions rule me in what I thought would be the best choice for my children and family. I did not yet understand that God made a simple way for me to keep my family safe. And that was to submit (yes, that dirty word) to my husband.

I remember one day my husband was putting in a new hardwood floor in our dining room. I didn't think he had done a good enough job and got down on my hands and knees sanding it when he wasn't there, trying to make it better. All of a sudden, I could see that what I was doing was at best futile but also dangerous, willful, and hurtful.

It took me a long time, to my shame, to adjust to the reality of God's command that a woman should submit to her husband.  (I can almost feel the whoosh of rotten tomatoes being thrown in my direction.) That is why I write this, to spare someone else the misery I went through.

It comes down to this, when there are two people, there are bound to be two different wills. They can clash against each other 'til death or divorce do them part, or we ladies can be like Abraham. We pray in faith for our husbands as the designated head of our home and family. And then we let him be in charge. God can turn his heart if he is going the wrong way, but not if we are putting up resistance.

It brings peace to twisted and anxious souls to rest in faith. Just like satan came against God and fell one day, it was because he had a different will than the wise will of the Father. One day, we will see that God's way always is for the best. We will know it when we see our enemy cast into the lake of fire.

But for now, we can keep him from reigning havoc in our family by being like Abraham and trusting God, and give our husband the authority bestowed upon him by God.

Wives, likewise, be submissive to your own husbands, that even if some do not obey the word, they, without a word, may be won by the conduct of their wives, when they observe your chaste conduct accompanied by fear. I Peter 3:1-2

For in this manner, in former times, the holy women who trusted in God also adorned themselves, being submissive to their own husbands, as Sarah obeyed Abraham, calling him lord, whose daughters you are if you do good and are not afraid with any terror. I Peter 3: 5-6


I want to be a daughter of Sarah. No matter where we find ourselves in our marriages or in our lives, we can choose to be Sarah's daughters, all because we choose to trust God in our lives and not in our own plan, which will lead only to the road of destruction. It is never too late to start!

Posted by inChristalone~Megan Vance at 8:23 AM No comments: